Tuesday, March 12, spanked for maintenance.   Our weekend vanilla guests left and I was told to prepare for a good spanking in the evening.  After a productive work day, I showered after dinner and she told me it was maintenance time and was directed to the bedroom.   I took position, presented my freshly shaven cheeks and waited.  Several minutes later, she entered and began laying out the implements to be used for my spanking.  First out was the blindfold followed by the short flogger, riding bat, narrow hairbrush, rubber thumper, and flexible leather paddle. 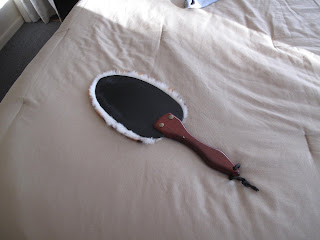 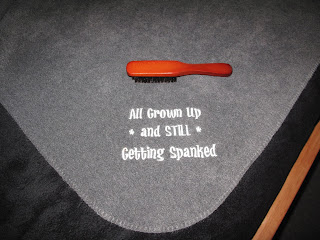 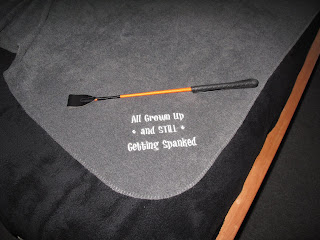 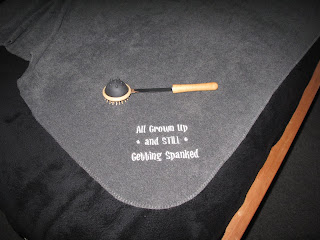 After donning the blindfold she began the warm up with the short flogger.  It actually feels nice with light strokes covering my back and cheeks.  Within minutes, the strokes intensified and began to sting.  Harder yet, the horizontal strikes turned my cheeks pink.  On came the thumper and the easy strokes were history.  Swung firmly, the thumper covered my ass with thudding blows.  Not a square inch was spared as this tool was used for several minutes.  Suddenly I felt a different sensation as she mixed in stinging strokes of the riding bat.  Thud thud thud sting thud thud sting sting sting thud thud continued on and on as slowly the sting replaced the thud altogether.  Now in solo mode, the riding bat began its rapid assault on my ass with a hard whipping motion.  Well redden cheeks were now being stung with scores of hard strikes while tears began to wet the blindfold.  She spanked my ass soundly for several minutes while tears and yelps escaped from me.  Finally resting the riding did not mean a rest for me.  The flexible leather paddle picked up where the bat left off.  The smooth leather side smacked both cheeks very hard.  The target for this spanking seemed to be the round of my cheeks.  No upper or inner thighs, no inner cheeks, just spanks on the full ass.  Yelping after each strike and more tears were the norm as the leather paddle continued on for many minutes.  Along came the narrow hairbrush and my full cheeks were again the target.  Narrow and short did not prevent the hairbrush from delivering the kind of spankings a hairbrush is known for.  A solid hairbrush attack finally led me to stand slightly to relieve the tight skin of my cheeks.  Standing slightly exposed my chest and she immediately took advantage.  The short coarse bristles of the narrow hairbrush scoured my nipples.  Soon she dropped the brush and used both hands to pinch, twist and torment both nipples to the yelping point.  The hands slid down my sides onto my red cheeks, across the upper thighs and between them.  I had spoken too soon about the cheeks being the only target.  She pushed open the thighs with her hands more and more until I was spread to the max with my full package exposed and dangling.  She began a hand spanking with uppercut swings striking my balls, inner cheeks and anus.  She reached under me and grasped my cock hard and locked my hip against hers.  Using my cock like a handle she held me immobile while bard hand spanking my entire exposed areas.  This procedure continued for quite a while and she pushed me back down until my chest rested on the pillow on the edge of the bed.  My asshole and balls were being spanked soundly when she paused.  I dare not move as I heard the drawer open....she was getting another implement.  I knew in an instant as the first stroke shot white hot pain through my right cheek.  It was the rubber paddle. 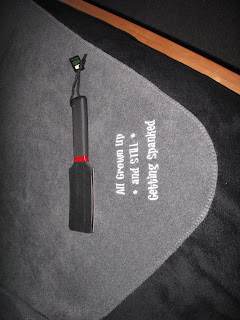 Another strike on my left cheek sent a yelp echoing thru the room.  About 50 strokes and 50 yelps and many tears later, she wound down the rubber paddle segment of the spanking.  I was red and sore beyond belief as she stood me upright to remove the blindfold.  This allowed ters to streak down my face.  A great spanking she said as I kissed and thanked her.  The dice roll was against me as this time a '1' turned up.  "Good" she said, we will maintenance spank you again on Thursday.

It was late so I did not get a chance to publish this episode until now.  Thanks for waiting and thank each and every one of you for your continued reading.  Comments and questions will be answered if you leave one.  Have a great day.

Posted by Spanked Cowboy at 2:26 PM